KIBLIX 2021 / Nocturne in Black and Gold (The Tenders iteration #5) 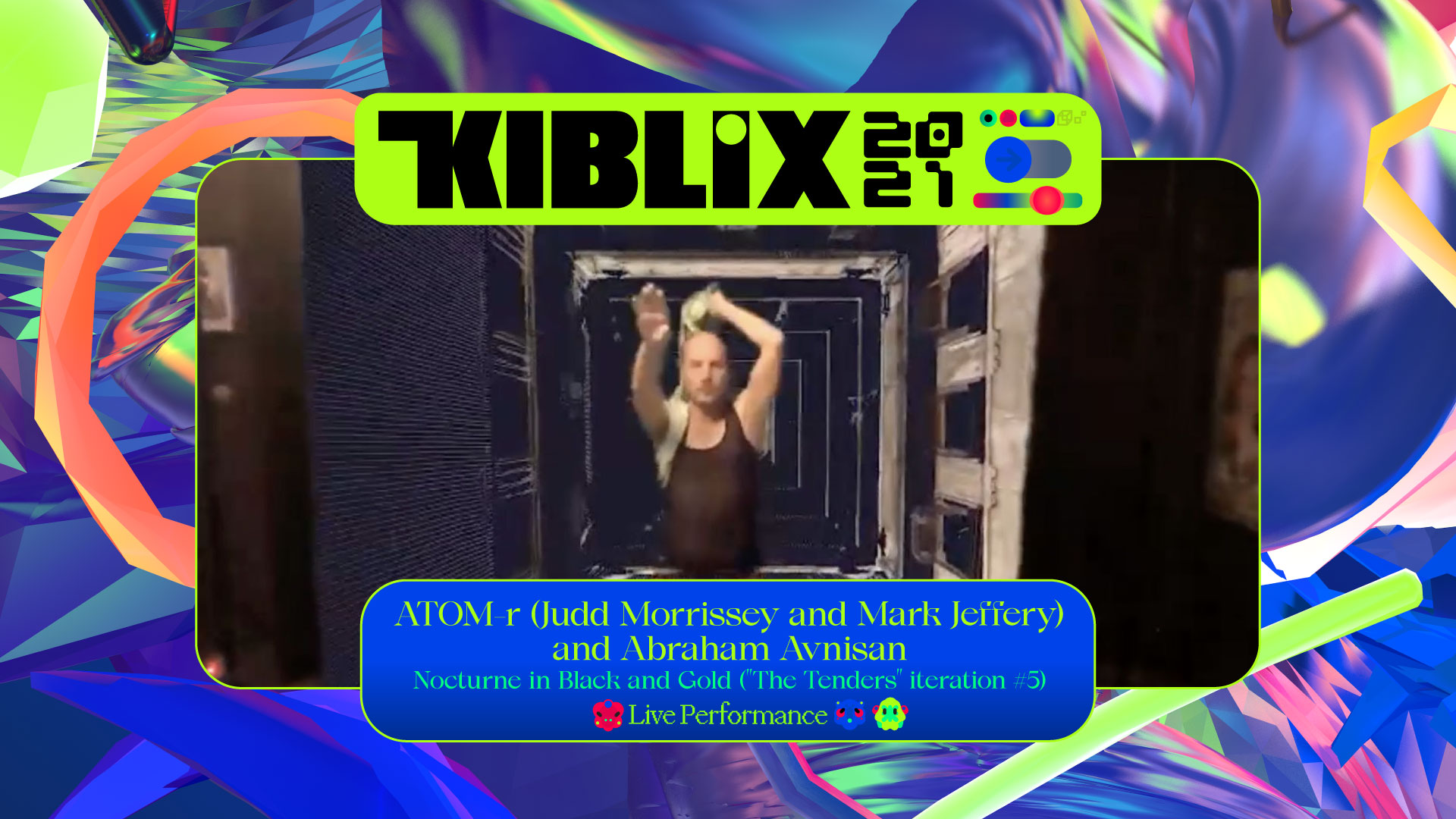 We kindly invite you to join us on Friday, 9 April, at 7 p. m. CET at ZOOM for a live mixed-reality performance Nocturne in Black and Gold (The Tenders iteration #5) by ATOM-r (Judd Morrissey and Mark Jeffery) in collaboration with Abraham Avnisan. The performance will also be live streamed @kiblix.org/streaming. The performance documentation will be later on exhibited at the KIBLIX 2021: Virtual Worlds Now exhibition at KIBLA Portal.

Does history repeat itself or do we just repeat the telling of it? Can a cover song recover something of the original, of the origin, or only bury it more deeply? The Tenders, created by ATOM-r (Judd Morrissey and Mark Jeffery) in collaboration with Abraham Avnisan, is a series of in-person and zoom-native mixed reality performances that engage with the cover song as a means of exploring the ways in which personal and political histories are written, re-written, and written over. The work juxtaposes an homage to Loy Bowlin, »the original rhinestone cowboy«, with 3D scans of the site of Fort Dearborn, an early American garrison out of which the city of Chicago was incorporated. Placing the flamboyant tradition of the rhinestone cowboy in relation to the history of indigenous genocide and expulsion, The Tenders seeks to invert and queer colonial narratives lodged deep within the American imaginary.

Judd Morrissey is a writer and code artist who creates poetic systems across a range of platforms incorporating electronic writing, internet art, live performance, and augmented reality. He teaches at the School of the Art Institute of Chicago and co-founded the performance collective Anatomical Theatres of Mixed Reality (ATOM-r). He is a recipient of a Creative Capital / Andy Warhol Foundation Arts Writers Grant, a Fulbright Scholar’s Award in Digital Culture, and a Mellon Foundation Collaborative Fellowship for Arts Practice and Scholarship. Judd’s solo and collaborative works have been included in a broad range of festivals, conferences and exhibitions at venues including the Art Institute of Chicago, Victoria and Albert Museum (London), Zero1 Garage (San Jose), Eyebeam (NYC), Le Cube (Paris), Anatomy Theater & Museum (London), Museum of Contemporary Art Chicago, and House of World Cultures (Berlin). Reviews of his work have appeared in the New York Times, The New Republic, RAINTAXI, and the Iowa Review.

Mark Jeffery is a Chicago based performance/installation artist, curator and associate professor at the School of the Art Institute of Chicago. Since 1994 Mark Jeffery has developed unconventional collaborations with visual artists, scholars, video artists, sound artists, new media and code artists, dancers, choreographers, curators, and writers. In 2012, he co-founded the language, performance, and technology collective Anatomical Theatres of Mixed Reality (ATOM-r). ATOM-r premiered its first work The Operature in 2014 and in 2017 premiered Kjell Theøry a performance and exhibition created through two residencies at The International Museum of Surgical Science and The Graham Foundation. ATOM-r is currently in research and development of their new work, Rhinestone Cowboy that they anticipate to complete in winter of 2021. He is organizer of the IN>TIME Tri Annual performance festival hosted by multiple venues in Chicago. The last edition was in the winter of 2019. Mark was a former member of the internationally renowned Goat Island Performance Group from 1996–2009. Recent performances and exhibitions include: Graham Foundation, Chicago, Victoria and Albert Museum, London, Chisenhale Dance Space, London, Alfred De Vrove, Prague, International Museum of Surgical Science, Chicago, Performance Arcade, Wellington, NZ, Australian Centre for Moving Image, Melbourne and 606 Trail, Chicago. Since Summer 2019 he has collaborated with Shannon Stratton, Kelly Kaczynski and Kelly Llyod on a 3 year long research and exhibition and performance project at The Poor Farm, Wisconsin that will culminate in a large-scale exhibition summer 2022. Since summer of 2018, Mark has created a performance and exhibition space in his Ukranian Village home, called Ohklahomo. The new space allows for emerging and established artists to connect, make new experimental work and also always has a dinner component.

Abraham Avnisan is an interdisciplinary artist whose work is situated at the intersection of image, text and code. Using a host of emerging technologies including 3D scanning, augmented reality and virtual reality, he creates applications for mobile devices, interactive installations and technologically mediated performances that seek to subvert dominant narratives through embodied encounters with language. Abraham has presented his work both nationally and internationally. Selected exhibitions, biennials and performances include: Inside Practice at the Art Institute of Chicago in Chicago, IL (2020), Refiguring the Future at 205 Hudson Gallery in New York, NY (2019); Between Bodies at The Henry Art Gallery in Seattle, Washington (2018–2019). Abraham holds an M.F.A. in Poetry from Brooklyn College and an M.F.A. in Art and Technology Studies from The School of the Art Institute of Chicago. Abraham is an assistant professor of Emerging Media & Technology and Journalism & Mass Communication at Kent State University.