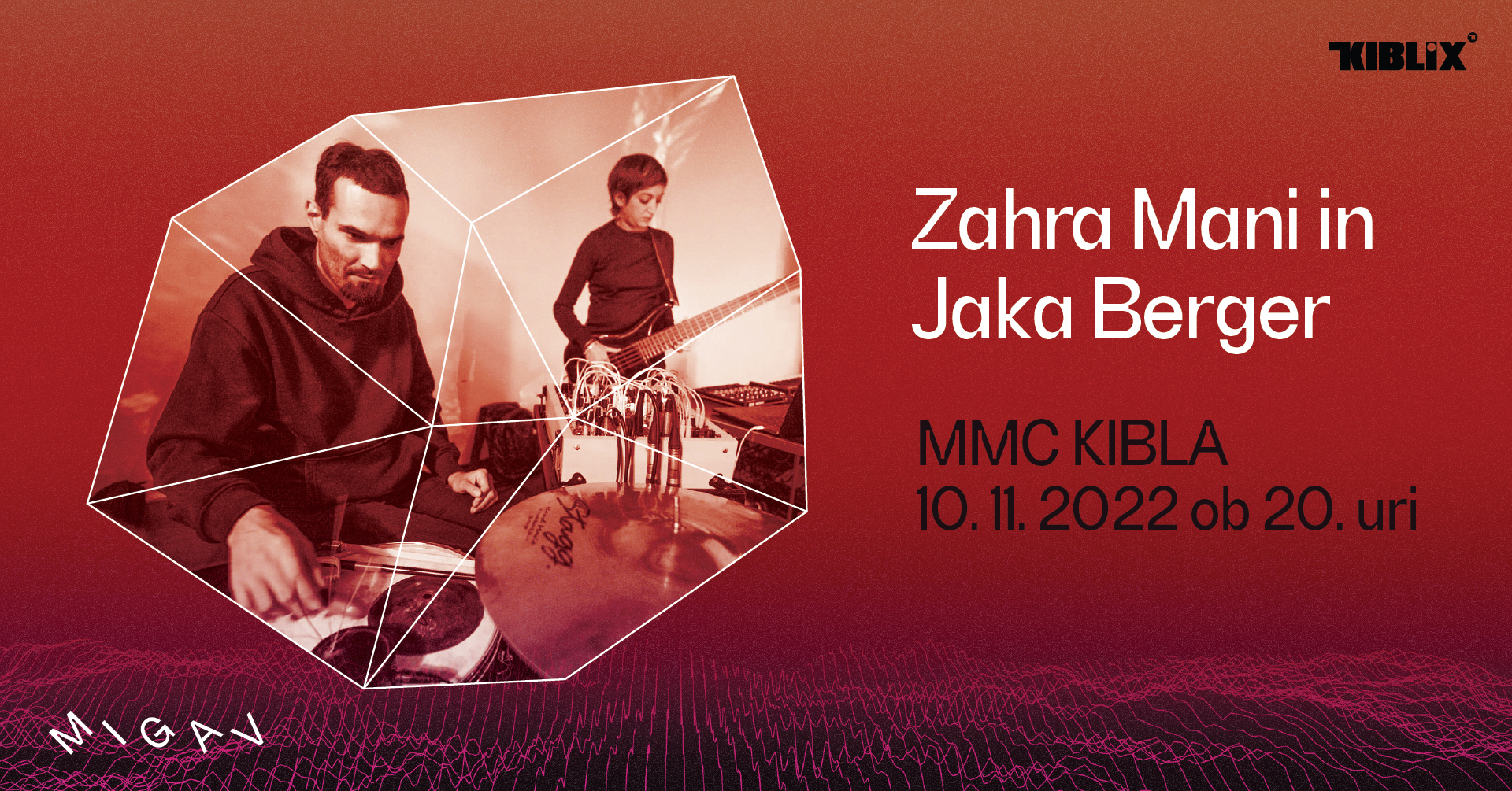 We kindly invite you to the fifth event of this season's MIGAV music cycle, an AV performance Reflections of Empty Spaces by Zahra Mani and Jaka Berger, which will take place on Thursday, 10 November 2022, at 8 p.m. at MMC KIBLA.

Mani and Berger explore the acoustic imaginings of abandoned spaces. Raw drums, acoustic objects, the bass guitar, and everyday sound are transformed through modular synthesis and live effects into a sonic world that shapes the performance space in a process of de- and reconstructed acoustic exchange heightened by the abstract industrial visuals of Sardinian film artist Gavino Canu.

Zahra Mani and Jaka Berger combine several instruments and sounds along with immersive visuals in a dynamic musical and inter-medial dialogue. Berger’s unique and sensitive percussion is enhanced by modular synthesizers and effects that he triggers through oscillations while playing. Zahra Mani’s field recordings combine everyday and found sounds that she dissects and reconstructs in her studio, transforming them into an instrument enriched with her electric bass guitar with effects that she designs for each performance. Together, the duo creates a complex and dynamic interactive moment, drawing the audience into their imagined world.

Zahra Mani is a composer and multi-instrumentalist who creates pulsing, shifting soundscapes derived from her burgeoning archive of instrumental and found sound that she has been recording and developing for years. Her work focuses on spaces in between. Crossing boundaries, challenging aesthetic and cultural preconceptions in an ongoing flux of sound, word, and motion, Zahra Mani creates shifting, pulsing, explosive, whispering, murmuring, screaming, cajoling, and caressing sonic worlds. She harvests sounds from the field and transforms fragments of natural and mechanical audio material into dynamic acoustic monuments where voices, instruments, machines, sea, wind, and landscapes sound instrumental and her electric bass guitar is transformed into raindrops, engines, and throbbing monsoon winds.

Jaka Berger has been one of the most active, creative, and versatile drummers, composers, and improvisers on the Slovenian music scene in the last fifteen years. In 2006, he released his debut album with Samo Šalamon and Achille Succi for the Italian label Splasch records. Since 2014, he has been regularly publishing music for prepared drums that he is constructing by himself. His albums are regularly reviewed by international media on improvisation and electroacoustic music. He is part of the experimental sound installation project Partija/The game with visual artist Matej Stupica, member of the bands Ludovik Material and Darla Smoking. He performed in independent theater shows Gremo Vsi!, Novo mesto Readymade and Nein, and toured with EBM legends Borghesia. In 2015, he released an album of graphic composition Treatise by Cornelius Cardew. In 2016, he performed his most complex piece Audible life stream tentet for ten musicians. In 2017, he finished a tour in Japan and released a second album with the international VOB trio. Currently, he is performing free jazz with Mezei Šalamon Berger trio, Fresh Dust trio (FMR records UK), Bootleg Unit (FMR records UK). He has released an electro acoustic album dedicated to composer Morton Feldman with pianist Dejan Berden and is integrating modular synth into his prepared drum set. Since 2020, Jaka has been returning to Cornelius Cardew Treatise composition; he has also released an album called Breakfast with Cardew that received very good reviews in international media. In 2021, he released a book of poetry remixes and sound translations called Poetrix, which includes poems of the best Slovenian independent writers. In recent years he has worked as a mentor on drumming and musical improvisation workshops and has been regularly teaching drums as private lessons. He is constantly upgrading his knowledge and experience in drums, music, composing, and improvisation with many different musicians and improvisers from all around the globe and is developing the concept of workshops as a wide collective creative space based on improvisation and communication. With his ideas and approach, he incorporates music into our everyday lives and through it teaches and encourages relationships based on listening, responding, coexisting, and cooperating.

Admission is free.
__
Production: ACE KIBLA
Co-organized by: X-OP Association for Contemporary Art, CODE BLUE Association
Supported by: Ministry of Culture of the Republic of Slovenia, Municipality of Maribor