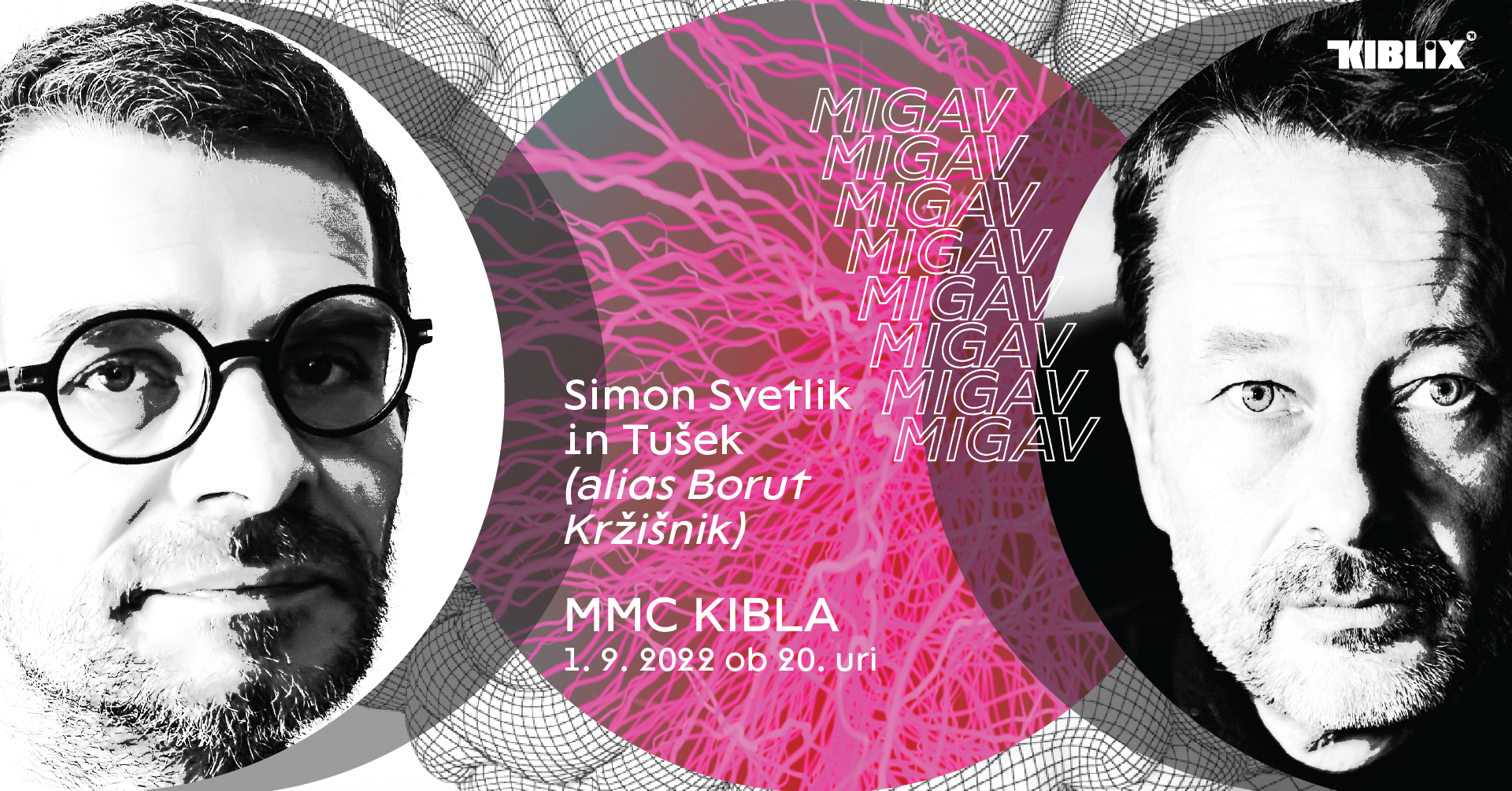 You are kindly invited to the third event of this season's MIGAV music cycle, an audio-visual performance by Simon Svetlik and Borut Kržišnik entitled O, which will take place on Thursday, 1 September 2022, at 8 p.m. at MMC KIBLA.

»There is nothing more interesting than the constant exploration of the strange paths of freedom. We are in an open and slippery space, where the image of freedom flows from one form to another. The boundary between the living and the technological fades, deliberateness, and mechanical determination are shattered against the unpredictability of the present moment. Thus, again and again, we discover aliveness in technological devices and mechanical patterns in ourselves. In this tight wedge of unpredictability and constant change on the one hand, and fixed constructs on the other, we build that 'impossible' performance that cannot be performed in any other way.

The aim of our art is to explore the relationship between life and machine. Through our performances, we explore the connection between the freedom and the unpredictability of the 'living' moment on the one hand, and the fixity and mechanical nature of the computer and sentient technologies on the other. Both extremes are in constant interaction and the boundary between them is gradually fading. In this way, we discover in the human being not only those qualities that we consider to be characteristically human but also characteristically machine attributes such as mechanicality and predisposition. We can therefore rightly say that technology is not only around us but is also part of us. Our brains are the most advanced technological achievement of evolution. Only when we become aware of our material constitution can we begin to question free will more thoroughly. On the other hand, we are discovering the vividness and unpredictability of machine sentient technology. With its dynamic and powerful capacities, the computer reaches into areas that cannot be precisely determined but are at the same time different from those within human reach. In this way, in the performance itself, we operate with live, analog, and digitally created audio-visual material, which we process in real time and confront and modulate with different programs and devices on the computer platform. Through the dynamic interaction between human and computer-technological devices, we thus create our own 'impossible' performance, which only one of the two parties could not possibly perform.«

O is a series of audio-video-movement/dance events that have been performed 15 times over the last decade; the cast of participating artists has changed/permuted over the course of the series. This time it is a constellation that is quite common nowadays: sound and video projection. The musician processes the audio materials in real time; his output/final audio signal is incorporated by the videographer into his real-time processing of the video materials, achieving a synchronous audiovisual effect. Their work will be presented in the space as an audio-video installation.

Simon Svetlik (b. 1973, Ljubljana) graduated in painting in Ljubljana, where he now lives and works. He works with all available media and does not limit himself stylistically; his exploration of the interconnectedness of the visual medium with other media and his free choice of subject matter can hardly be described by a common denominator, ism. He has created a wide variety of artworks (paintings, sculptures, photographs, videos, ambient installations, interventions, installations, performances...), platforms and participated in many group projects. He co-founded the Art group rgb (collective artistic research laboratory, 2001), and the platform Symptoms of the Meta City (non-institutional art platform, 2015); he is an associate member of the Circulation2 platform in Ljubljana; he co-created the set design for the latest film by Franci Slak, As in Heaven, So on Earth; as a designer and producer he creates a series of performative events with the single title O, and he focuses on non-institutional/independent and non-profit productions.

Tušek (a.k.a. Borut Kržišnik) (b. 1961, Zagreb) is a Slovenian composer of contemporary music living in Ljubljana. He graduated in psychology at the Faculty of Arts in Ljubljana but has dedicated his life to music. With his unique way of composing, he integrates live performance with music software on a computer platform, thus transcending the boundaries of individual methodologies. With his polyglot artistic language, he moves through many contrasts and presents them to us with inspiring optimism. He has released eight albums on the British Claudio Records label (Claudio Contemporary section) and has composed music for numerous films, dance and theatre performances, and other projects. He has worked with directors and choreographers such as Peter Greenaway, Gerald Thomas, Natalia Horečna, Edward Clug, Emil Hrvatin, Thomas Noone, Julie-Anne Robinson, and others. His music has been performed at all major film festivals, from Cannes, Venice, and Rotterdam to Toronto, Moscow, and Hong Kong, and his performances have been produced by the Royal National Theatre, LaMaMa, Teatro Piccolo, Schauspiel Frankfurt, Finnish National Opera and Ballet, BITEF, and many others. Kržišnik won the first prize Vesna at the Slovenian Film Festival 2008 (Landscape No2) and the first prize at the Napoli Danza Festival – Il Coreografo Elletronico 1994 (art video Labyrinth).

Admission is free.
__
Produced by: ACE KIBLA
Co-organized by: X-OP Association for Contemporary Art, CODE BLUE Association
Supported by: Ministry of Culture of the Republic of Slovenia, Municipality of Maribor