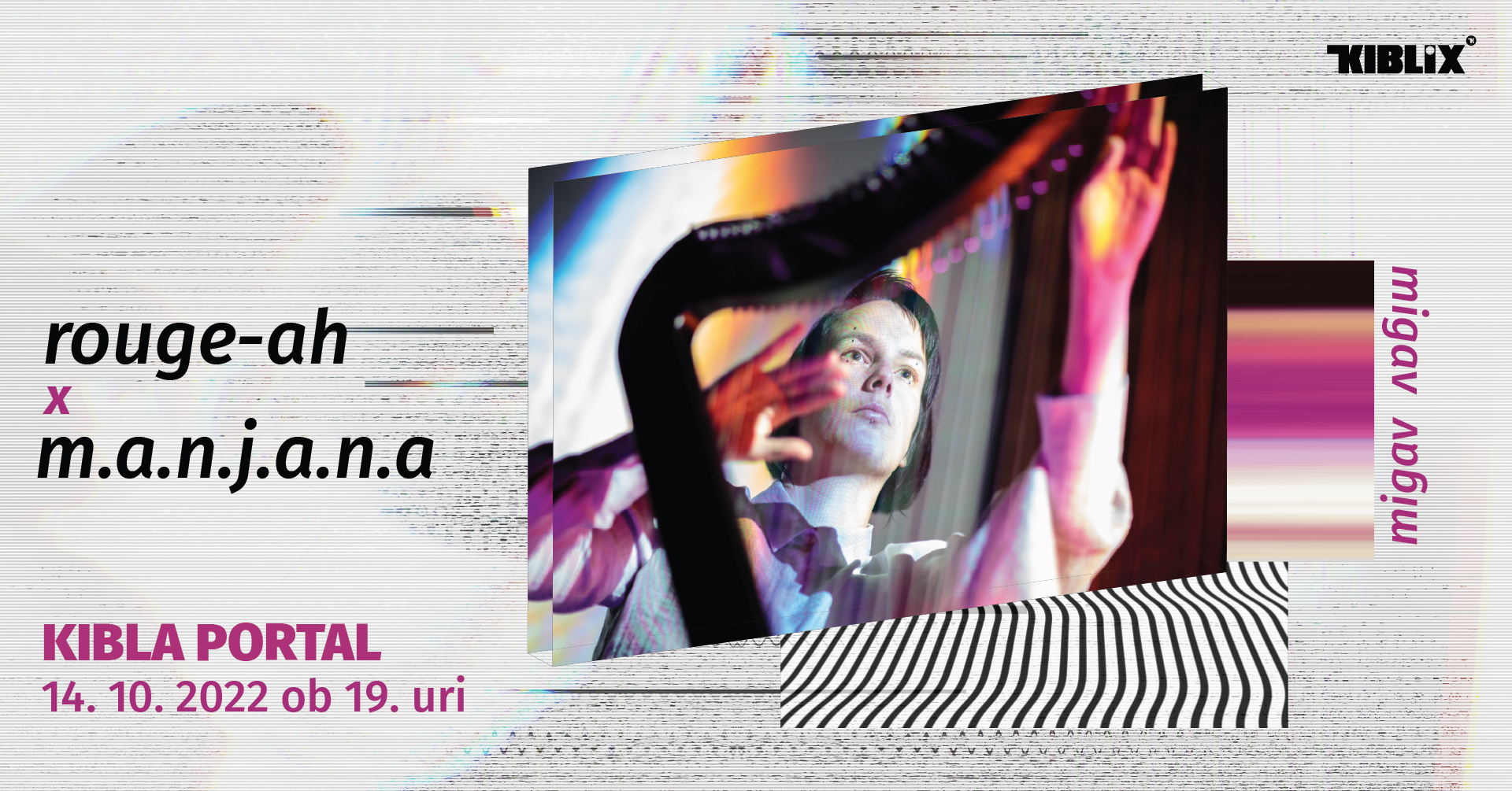 On Friday 14 October 2022, at 7 p.m., we continue with the fourth event of this season's MIGAV cycle. This time, the experimental harpist and interdisciplinary artist rouge-ah and the versatile artist m.a.n.j.a.n.a are preparing a very special experience, taking over KIBLA PORTAL (Valvasorjeva 40) with a musical-visual fantastic performance.

In exploring the material for her upcoming studio album, rouge-ah (Urška Preis) is focusing on her dreams. She occupies soundscapes with yearning melodies, monstrous screams and almighty noise. What seems like an easy harpist's dive into sleep, soon turns out to be a nightmare of roaring, rumbling and distorted words. m.a.n.j.a.n.a (Manjana Zadravec) interprets the musical story through the confrontation of her own nightmares. Death, corpses, illness, distorted faces and rebirth, which occupy her dream universe, are embodied through the veil of reality in her costume and set design. Together they offer a unique insight into the intertwining of two fantastic worlds and a holistic cathartic experience.

Urška Preis, who works as a solo artist under the pseudonym rouge-ah, is a musician, harpist, visual artist, and music writer. She finished her MA studies at the Academy of Fine Arts and Design Ljubljana, she did her exchange programs at Listaháskóli Íslands in Reykjavík and the Hochschule für Grafik und Buchkunst in Leipzig. Her debut album bare was released by Kamizdat Records in autumn 2018. She is currently focusing on research and composition for her second studio album. She and the electronic music producer Tine Vrabič – Nitz formed the II/III duo which debuted at the AmbientSoup label in 2020 with the EP It Could Be Paradise. Urška is also a member of Rok Zalokar’s fluid ensemble Zhlehtet. Besides her musical engagements she prepares shows and other contributions for Radio Študent, ARS – Radio Slovenia Third Channel, Odzven and Neodvisni platform, curates the music program at the Red Dawns Festival, writes, photographs, exhibits, designs and gives talks.

Manjana Zadravec is an explorer of the invisible between Vienna and Ljubljana. She is interested in the comprehensive systems of social relations and how these are reflected in the individual being. She started to gain experience in art at a young age, as an actress she was involved in KUD Pozitiv. Later, as a cloakroom attendant for costume designers Alenka Korla and Alan Hranitelj in several RTVS productions, and as an animator for the Prešeren Awards under the baton of Matjaž Pograjc. She was also an assistant to stylist Barbara Podlogar on international projects. She has led workshops on European cuisine in Urugi, Japan, and workshops on creative Japanese cuisine on the occasion of the Day of Japan in Ljubljana. In Vienna, where she is currently putting down roots, she is studying the effects of the subconscious pursuit of personal preference through the individual's choice of a unique outfit. Among other things, she successfully runs a vintage clothing atelier Vintage shop & Vedic astro in the center of Vienna.

Admission is free.
__
Production: ACE KIBLA
Co-organised by: X-OP Association for Contemporary Art, CODE BLUE Association
Supported by: Ministry of Culture of the Republic of Slovenia, Municipality of Maribor