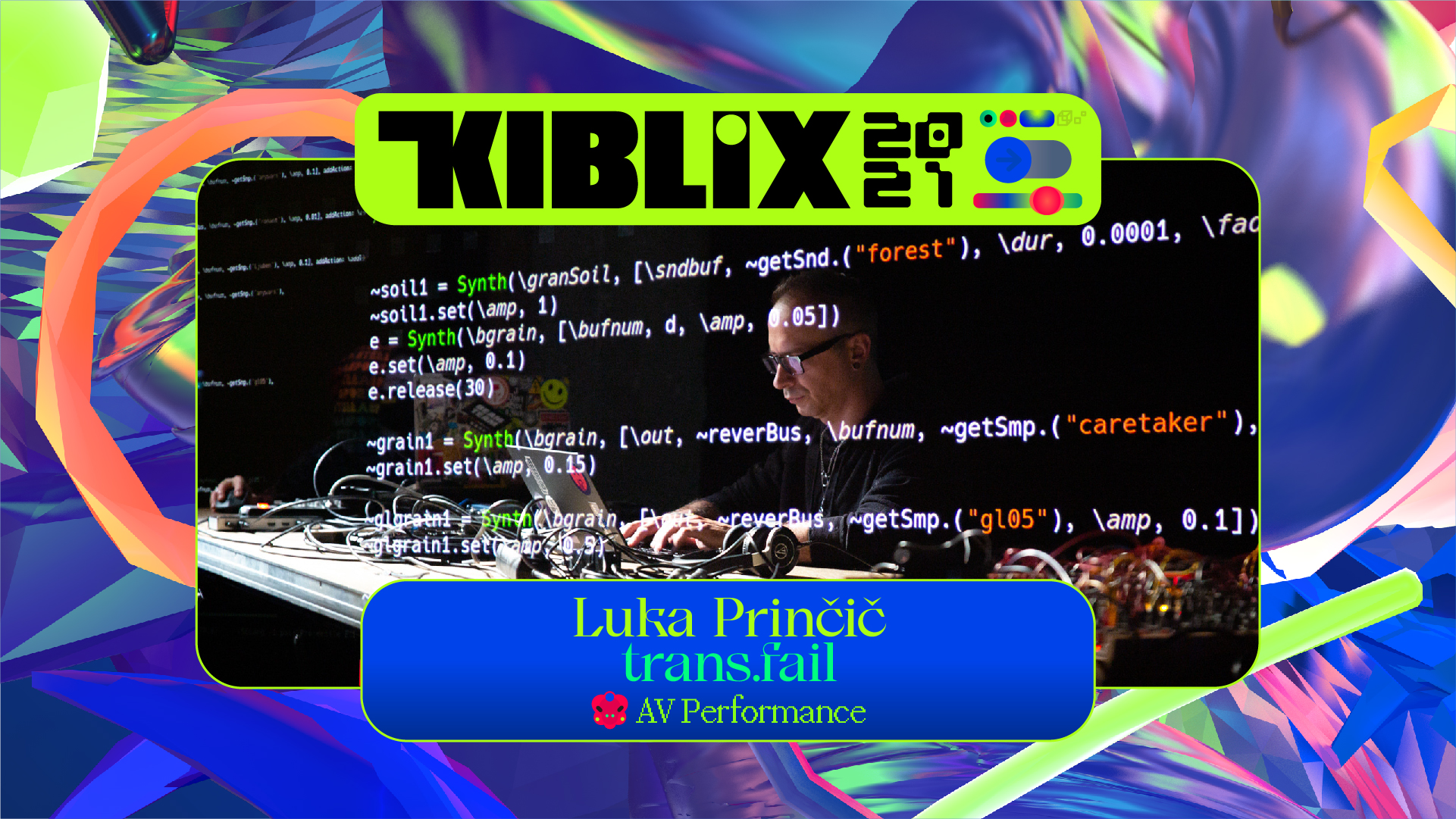 You are kindly invited to join us on Friday, 12 March, at 8 p.m. CET for a live stream of Luka Prinčič’s AV performans. The live stream will be available at https://kiblix.org/streaming/.

A glitchy online streamed telematic solo hybrid performance utilising prerecorded and real-time live audio-visual elements and text forming often frantic and chaotic mesh of data, images and noise. In some ways, it's a stream of consciousness, but through another perspective, it's again at least partially controlled artistic method and form. It's sourcing data and transfiguration from number of channels: as much as possible from todays media-oversaturation, especially trove of online videos, home-made software, sonic explorations and visual algorithms, hacks, glitchings, and number of thematic interests in the background: slavic-romani myth-futurisms, gender fluidity, imperialism, media theories, praxis and artistic critique of digital capitalism.

This is a telematic research on successes and failures of media/gender. How can a gender be seen, used, and/or realized as a medium for nomadic thought, and how are contemporary digital media gendered in their appearances and/or algorithmic backends? Gender has been seen mostly as embodied experience that usually wasn't decoupled from physical body, however digital media are here seen as a challenge to that asumption. Fluidity of gender is perceived as a failure, a glitch in the system, while embodied live expression (life?) via telematic performance still invites new and undiscovered perspectives.

Luka Prinčič (1977) is a musician, performer, and intermedia artist who, through years of work in the fields of computer and electronic music, the art of sound, inter-media installations and performance, dedicates various approaches to creative processes and their manifestation of artistic events and works. He graduated from Audio Recording Arts (BA) at the SAE Technology Institute in London. He specializes in computer-supported electronic and experimental music, elaborate funk rhythms, immersion sound landscapes, stage music, and video, and artistic research in the field of digital media. He performed at festivals like Ars Electronica (Linz), EMAF (Osnabrueck), Netmage (Bologna) and Trouble (Brussels), worked at Ljubljana Digital Media Lab (Ljudmila) and local hackerspace CyberPipe (Ljubljana), exhibited at Kapelica Gallery, Museum of Modern Art and MSUM Ljubljana, and travelled with his work all across Europe and further (New York and New Zealand). From 2006 he is self-employed in culture. He received numerous working grants, state subsidies and in 2013 he was together with Maja Delak awarded with the Golden birg award. He currently works at Emanat Institue and runs Kamizdat, music label for electronic music, in Ljubljana, Slovenia.